The Cobra Art movement was a short lived but influential expressionist art form. Cobra flourished between 1948 and 1951. Post- World war II , the paintings were highly spontaneous and rebellious. It was inspired by the art of children and mentally ill. But the paintings themselves illustrated much of what was going on in Europe at the time. It reflected people who were enduring the implications of Nazi rule, devastation and political complication.

History of the Cobra Art Movement

The Cobra Art movement started in 1948 with 3 young pioneers in their field. Karel Appel, Constant & Corneille. The name CoBrA is a combination of the starting letters of the cities these founders were from – Copenhagen, Brussels and Amsterdam.
It grew to over 30 members in the 3 year period the group was active. Much of the members were democratic and opposed much of the dictatorship that Europe had suffered from in recent years. This is why their art resembles children, mentally ill and untrained artists’ paintings. It is opposing much of the political views of the day and was also considered ‘outsider art’. But this made it a serious movement. These artists were strongly averse to nationalism and rebelled against the dominant culture of the wealthy. Their socialist ideals embraced a bond between artists and the people and between world cultures. CoBrA artists did their best to create pieces that weren’t bounded by any rules. They painted images portraying animals, humans, and fictional figures in a new perspective and light, which hadn’t been done before. They embraced the process of painting as well, not jsut the final result.

The members worked with various types of materials, working methods and different forms of expression creating 100s of pieces.  They were displayed at the Stedelijk Musuem in 1949 which was highly controversial. The paintings were seen to the press as nothing but ‘scribble, claptrap and splotches’.

The CoBrA group also likes to work with different types of media to make a bigger impact, and so they also partnered with poets and publishers.

Members of the Cobra Art Movement started pursuing other works in different countries. And so the group dissolved. The 3 founders Karel Appel, Corneille and Constant moved to Paris to pursue different styles of art and different interests. So did other members of the movement who dispersed to places such as Denmark and the Netherlands. 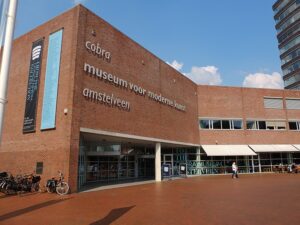 An entire museum was established in Amsterdam to display the works and thinking of the CoBrA Group. This includes paintings, paper pieces, sculptures, poems, magazines, photographs and posters.

Below you can take a look at some of the most profound CoBrA art pieces by some of the original founders of the movement.

Appel prepared the surface of Questioning Children by nailing discarded pieces of wood to an old window shutter. The vibrant colours and roughly-painted figures recall the spontaneity of children’s art. CoBrA artists believed that such unconventional sources could re-invigorate post-war culture. In the same year Appel also used the title Questioning Children for a controversial mural at the Town Hall in Amsterdam, which was condemned as incomprehensible, and covered over with wallpaper. There is a note of tragedy in these works as the Dutch title also means ‘begging children’ and evokes scenes of poverty that Appel had witnessed in post-war Germany.

After Us, Liberty –   Constant Anton

Constant of all the cobra artists, especially loved to make art in a way that was influenced by children’s drawings. In this piece he expressed his political affiliation through an oil painting of the heads of bizarre creatures and human-like figures. Classical art and its legacy was a particular and enduring enemy for the Dutch artist, and he originally entitled the work To Us, Liberty as a tribute to CoBrA’s ethos of creative freedom of expression that broke away from classical norms. He changed the title after becoming disillusioned with the possibility of creating genuinely free art in an unfree society, while still wanting to express his ‘…hopes for the freedom all men are looking for.’ 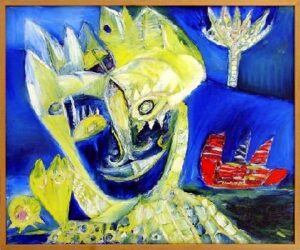 The picture is a fairy tale, told with simple effects. Like his colleagues in the Cobra group, Carl Henning Pedersen was interested in the immediate, naive visual expression. Here, he has used many of the elements we know from children’s drawings. The figures are quite stereotype and immediately recognisable, and they are painted in strong primary colours. The main character is placed directly in the foreground. In the background a red ship can be seen rocking and a palm tree waving in the wind. A great deal of use has been made of blue, yellow and red, so we have an impression of great splendour. We come to think of distant, exotic realms. We are in the world of the imagination rather than the world of reality.

Many say that cobra arts is in the history books. But many modern artists reflect heavily on this type of art. Myself, Stephane Cruz, has been highly motivated by the works of Appel and others and have continued this concept of art. Below you will see much of my own cobra art pieces. Also please feel free to check out my shop to purchase Original Cobra Art Paintings.